Travel back in time to America’s Gilded Age

the Belmont-Whiting Scandal of Newport, R.I.

The American Gilt Trilogy ©, is based on the life of  American débutante Sara Swan Whiting as she steps into society, keen for a marriage that will bring her love, while maintaining her place among the elite. Friends with the Mrs. Astor and her daughter, Carrie, it appears Sara will achieve the goal of her heart and elevate her position in society, until scandal interferes with Sara’s dreams leaving her reputation in peril.

Newport, R.I. 1880 – American débutante Sara Swan Whiting has been trained for one purpose: to marry well into society. Together with her friends, Carrie Astor and Edith Jones (Wharton) Sara débuts into society and is introduced to the bachelors of New York’s wealthy families, hoping to find the perfect marriage.

‘Ethereally beautiful’ and ‘the spirit of the ball’, Sara garners many suitors. But none steal her heart, until destiny steps in and she is introduced to Oliver Belmont, the handsome son of financier August Belmont. Raised in the privileged style of his family’s wealth, Oliver is pressured by his father to find a suitable vocation, but he prefers a gentleman’s life of leisure.

Oliver realizes that marriage will offer him freedom from his father’s constant insistence on a career, and he sets his sights on the naïve and beautiful Miss Whiting. Smitten with Oliver’s charms, Sara begins courting the handsome Mr. Belmont. While on an afternoon outing Oliver spontaneously proposes marriage, breaking protocol by not getting his parents approval first. Sara accepts the proposal – only to discover her engagement to Oliver has been rescinded and blocked by his parents.

In an age when royal titles and large dowries were exchanged through marriage, Oliver and Sara find themselves forced to deal with the decorum of Gilded Age society. What develops is a story that will transport you through time as ‘American Gilt – Début’ unfolds.

Paris, 1883 – The new year finds Oliver and Sara enjoying their honeymoon on the Champs-Élysées after a protracted and challenging engagement. But their holiday is interrupted by the arrival of the bride’s mother and two sisters.

Originally agreeing to Sara’s family sharing their apartment, Oliver becomes disgruntled and retracts the offer of hospitality. Disappearing for days while overindulging in absinthe, Oliver displays uncharacteristic mood changes, making him quarrelsome and temperamental. He offers to pay for a separate suite, but Sara refuses, as she has grown frightened of Oliver, realizing there is a darker side to her groom.

Oliver escapes to gambling houses and brothels where his drinking escalates. Horrified, Sara refuses him in her bed and a violent confrontation ensues. Oliver threatens Sara with a scandal and divorce, storming from their suite shouting “you are not my wife,” leaving Sara battered and terrified.

Days turn to weeks, but Oliver does not return. Heartbroken, Sara fights against scandalous rumors, telling friends Oliver is traveling on business. Allegations reach Sara that Oliver is with ‘dancers’ amid accounts of a previous marriage while in the navy, rumors she refuses to ‘dignify with a response’.

Fears of abandonment materialize when he writes from Spain weeks later. Soon Sara realizes she is pregnant with Oliver’s child. Both the Whiting and the Belmont families face public scandal, each accusing the other of the blame.

Mrs. Whiting orders the family back to Newport, urging Sara toward divorce. Oliver learns of the pregnancy and returns to Paris, but arrives too late, receiving a telegram from Sara: “Do not come. Everything at an end.” 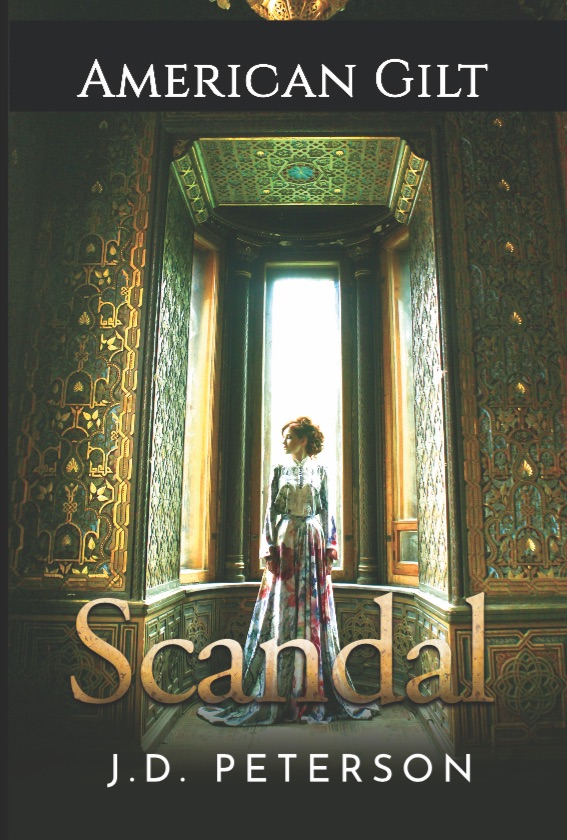 The final book of the AMERICAN GILT trilogy, Scandal, continues in 1884 as Sara Swan Whiting, once a popular débutante, finds herself disgraced by divorce, and left with a child to raise alone. Previously an admired member of the social set, she is now shunned and becomes the target of judgment and criticism by her contemporaries. Sara has a friend in Mrs. Astor, the queen of the Four Hundred, but will Mrs. Astor support Sara?

Sara’s daughter, Natica, born of the ill-fated marriage, is denied paternity by her father, Oliver Belmont, and subsequently the lineage of the powerful Belmont family. Sara never speaks of the divorce, keeping the circumstances of Natica’s birth a secret from her daughter. Years pass – Natica grows into a lovely young woman following in the débutante footsteps of her mother. Now a society favorite, Natica is spunky and beautiful, with a striking resemblance to her father.

While Natica charms society, her father regrets their estrangement and watches her grow up from a distance. Anxious to know his only child, Oliver approaches Natica, but his efforts are thwarted by Sara, who forbids him visitation in retribution to his denial of paternity.

As Natica comes of legal age she grows curious and secretly sets off to find the facts behind her ancestry. But will the girl be able to handle the truth when she discovers her birth father’s abandonment and his abuse of her mother?

As the years pass Oliver reaches out, attempting to make amends with his daughter. But fate steps, preventing a reconciliation, when tragedy strikes.

Listen to a live reading excerpt from book one, Début:

Get Your Copy of The American Gilt Trilogy Here: